Gillman's Yellow Wallpaper and Why Women Need Something to Do 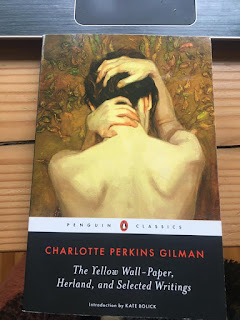 I had read an article by Shirley Samuels on the feminist interpretation of Gilman, already wondering what happened to the narrator’s baby in “The Yellow Wallpaper”. It seems that the biggest problem for the narrator is that she not only is given no responsibility at all except for preserving her mental state, but her link to her own child has been devalued. The child is missing, while she is forced to spend her days isolated in the nursery, a room preserved for children.
Not only is she forced into the nursery like a child, she is forced to live with a paper that is causing her to go mad; paper of course being the tool of a writer. This wallpaper is filled with her own imaginings and keeps exponentially cycling and increasing as time goes on. To me, it is similar to the life of a writer but only in this case, the writer needs to be confined with her fantasies and unable to get out of them. The story begins with the line “It is very seldom that mere ordinary people like John and myself secure ancestral halls for the summer.” Immediately, I thought of Daphne De Maurier’s Rebecca and, of course, the gothic novel Jane Eyre, along with the Gothic novel, in general. So, in other words, the narrator is asked to focus on the ancestral hall, the very thing that actually causes Gothic imaginings in the mind. This is a double-edged sword. Gothic imaginings create stories, but they also create terror, fear, madness, and the sublime. She is similar to Mr. Rochester’s mad wife in the attic, but it is actually worse in her case: she is forced to live in the room with her child’s absence. She is separated from the child she is designed to nurture.
There are women trapped inside the wallpaper, like characters trapped inside a narrative. They are creeping and crawling, likely waiting to be given something to do, like her. She ends the narrative creeping and crawling, in essence scaring her husband and causing him to faint in a rush of the sublime. Fine ending for an instructive tale about keeping women confined.
Moral of the story: women do need “something to do”. They aren’t children to be coddled and protected. When forced into the nursery, as we have seen, they will revert to a child-like state of imagination. And their “playing” will cause the adults to utterly lose it. But, proceed forward fully knowing the dangers you will create.