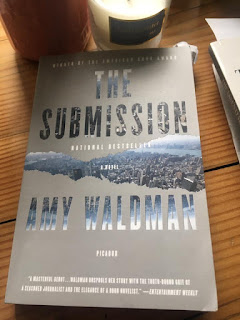 People fear desolation. When the 911 attacks occurred, the fingers were being waved around in search for something or someone to blame. It wasn't surprising what happened in the aftermath with Afghanistan and Saddam Hussein. People feel desperate. They are not thinking straight, and this is analogous to this moment in history, right now. There are the same signs of potential blame and distrust.


On pages 155-156 of the Picador edition of Waldman's The Submission, the characters briefly discuss the difference between an architecture of order vs an architecture of disorder. Paul brings up the ideas of Edmund Burke about the sublime after they had been discussing the security aspects: whether or not to wall it in or not. The conclusion was that walls would create "too contained a target". Mo is not cooperative when he sees how much the jury is trying to change the essence of his design. When Mo asserts that his ordered design has nothing to do with beauty and everything to do with a reaction against the chaos that had occurred there, Paul says that the parts should be "melted into one another." Not ordered in other words. This entire discussion seemed to be a way for them to discount Mo's designs. To attempt to take the Islam out of his art, so that it wouldn't be "equated with a paradise for martyrs."


To me, Mo's ideas were doomed before he even started. He shows them that he is on the side of his own country and the dead by creating a memorial that heals and attempts to change the land into a place where the harm can be reversed through a sense of geometry and order. I actually wondered if at this point in the book, no matter what design he came up with would have been contested due to his religion. Every time he appears he is described as being a professional, with thin legs, dark hair, well dressed. In other words, the way we picture an architect would look. He claims authority through his appearance. So why the attempt to undermine his authority? Fear, perhaps? He was originally listed as anonymous, so of course his design was selected without knowing his religion or culture of birth. This is a clear ethnonationalist attack against him by many people who claimed to be outraged. The design without the artist's name behind it was fine, so why should it change when we know who created it? The book brings up many questions about the source of art. For me, it brings up questions of the ideals behind beauty. Can an attack on the twin towers by Islamic fundamentalists cause we as a people to reject our own citizens? Even further can it cause our country to reject art and ultimately what we see as acceptably beautiful? All religious beliefs have positive ideals and many cultures have created beautiful works of architecture. They don't exist to create meaning where we don't mean  to create meaning. Meaning is applied by the maker. The maker claims authority.
When a memorial is ready to be built and an architect (or in this case simply the design) is ready to be chosen, the parameters that are held as most important will not come from a rational place. They will come from one of emotion. Waldman's book The Submission is a written symbol of the power and the authority Americans had over their own Muslim citizens at the time. Mohammed Khan had won with his design submission both anonymously and fairly. There was no reason at all to question his motives. It was simply his name that gave it away. What did his name give away? Well, the book complicates that.
The architect Khan being pictured or imagined as the villain in entirety regardless of his individual background or origin serves as a reminder of how far stereotypes and ultimately, prejudice against persons can go. In this case, very far! His designs were called "paradises for martyrs" and were protested against. His design was a beautiful and mathematical homage to the dead and would have been a fitting remembrance of that day: metal trees upended along with lines of various fruit trees contrasted with pools called The Void.   Ultimately, I do think that Khan was being chosen as the scapegoat for their grief. He wanted to be the one to design a memorial (which is a homage to grief). Instead, he became the scapegoat, the figure of blame.
There are two points in the second half of the novel that I felt were noteworthy as far as this idea of scapegoating: the first being when he shaves his hair, and the second being when his design ends up being actualized in a Muslim moghul's garden. He wished to wash away the blame by removing his hair. It was a process of purification of any outward signs that he is Muslim. I think this gives us something to ponder further: can culture be purified? Can we wash off where we come from just like that? Evidently, this novel tells us that you cannot. It sticks to you like a stigma. Khan couldn't wash off the blame that was placed on him for being Muslim. Was it his name that marred him? Maybe. But I do think that his roots would have been exposed, even if he was known as just Mo. "The suspicious wins over common sense." The angry mobs would not have had it. Their voices were too loud, too angry, and much too emotional to be silenced. What do you possibly say to people whose loved ones have just died in a bloody massacre, even if they are being irrational?
Posted by Susan E. Harris-Gamard at 12:33 PM