Wollstonecraft and Burke: The French Revolution 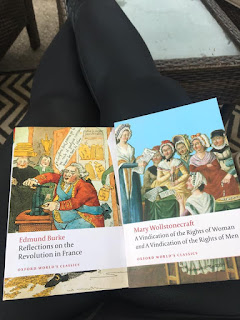 My aim is to trouble the binary that appears between Wollstonecraft and Burke. It is not as clear cut as it appears on the surface.


As I read through both works, I noticed that both are attempting to advance Enlightenment principles in their own ways (polarized methods, but still). I would argue that in some ways, Burke is similar to Jefferson in that his focus is on current land holdings and working through the concept of traditional inheritance (before attempting to create change else where). His focus is on building from the foundation of what is already there, instead of destroying the system entirely (forcing the church and ecclesiastical to give back their holdings and dissolving the monarchy altogether "Throwing out the baby with the bathwater"). Burke seems to be calling for a sense of fairness, whereas Wollstonecraft wants justice to be done. Wollstonecraft in her work is primarily establishing that tradition itself has caused the inequality and resulting frivolity of women, which in turn has harmed the structure of society. Therefore, the structure of society is utterly flawed and should not be built upon as the foundation, even if pre-existing and having a solid foundation in the past.


Burke calls a halt to this complete dissolution and destruction and yes, I would agree that his voice and ideas hearken back to those ideas circulating during the Glorious Revolution (or bloodless revolution). Why shed blood when we can peaceably figure this all out in a fair manner? Why so much unnecessary change and turmoil?


It is clear Burke is calling for a calming to happen: a rational response to the emotional reactions, whereas it is clear that Wollstonecraft is appalled that Burke would even think of silencing those who are suffering, namely the poor and disadvantaged who don't have inheritance and who are struggling. I found it interesting that Wollstonecraft called Burke out as having a lack of reason: "I perceive from the whole tenor of your Reflections, that you have a mortal antipathy to Reason" (Norton edition page 8) while striking him down as holding onto ancient ideas in his treatise.  So, is Wollstonecraft the more reasonable of the two?  Just because she says it doesn't make it true. Her rhetoric is one of exposing Burke for negligence of people's feelings and the right of individuals. It is an efficient way to break down a piece of writing that is four times longer than hers, while neglecting that he actually gives perfectly "reasonable" answers to her questions.  Emotional appeal is an effective method to downplay someone else's argument, making them look heartless and selfish in the process. So, is Burke an Enlightenment thinker? I would argue that he absolutely is. Burke recounts and defends every point to a detailed degree. Like I said, he reminds me of Jefferson and the methods Bacon and others have used to make an inventory of what already exists.  Like a Virginian statesman, he is fully aware you cannot erase what has happened before completely and it would be unfair to many to destroy the past completely. Reconciliation needs to happen gradually.


Wollstonecraft brings up some fair points herself, but to me she is more reiterating what is already at stake in the Revolution. Not so much Enlightenment thought as an abolishment of faulty societal structure. Her ideas are similar to those of Cavendish: exposure of the faults rather than a preservation and subsequent building.


It strikes me that they should have been working together to create a solution, instead of being polarized in their thoughts and ideas. It is a clear case of not listening and understanding the other and what is actually at stake within the big picture.


I would be interested in finding out just how far their arguments had gone after publication of Wollstonecraft's essay. Did they ever come to a compromise? Since I plan on writing on Aphra Behn, I am interested in this idea of emotional appeal and spectacle. This exchange is similar to some current discourse going on in politics today. This is a clear case where history needs to be remembered, and we need to learn from it. Burke is trying to get this across in his own painstaken, thorough fashion.