Hope and Other Dangerous Pursuits 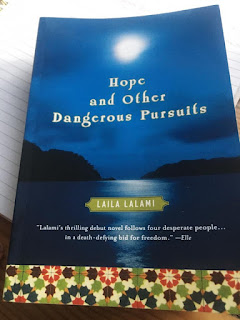 In Lalami’s case, she had emigrated to the U.S. because “Love had brought me to that moment.” (Lalami Bright Stars 41) Her situation was much different than Faten’s. She had made the choice from her heart, not out of necessity. Faten starts out as a “fanatic”, but turns to manufactured “Love” in order to survive the crossing and permanent placement in Madrid. She even found a higher-class roommate in the bargain who did not reject her immoral ways. Her two dual sides (fanatic vs. sensual and submissive odalisque) come together as she fights her way through her own story of survival. She uses her rebellious nature to avoid being pulled into Martin’s attempts to help her out of both pity and a desire for the unknown.  One could argue after analyzing and comparing her journey to those of both Murad and Lalami, that she was actually the character with the most physical agency in the book. Murad had a lack of physical agency due to the loss of masculinity he encountered by being jobless. He was not able to fulfill his role of breadwinner and take his rightful place in the Arab male social hierarchy. Because of both of their attempts at emigration, they would forever be lost in that liminal space of the dark water of the Mediterranean into which they were dropped: lost inside this space of conquest. As Lalami writes, “The waves are inky black, except for hints of foam here and there, glistening white under the moon, like tombstones in a dark cemetery.” (Lalami, Home 2)
In neither of their cases could they reject their gender roles: Murad could not reject his masculinity, and Faten could not reject her femininity. Because of their liminality, they are the characters with the most ability to weave tales in the book.  They are two sides of the same coin. Their placement in the narrative and their reflection of each other creates a duality. Faten’s story ends in a shared meal in a liminal space that is neither Moroccan, nor Spanish (she is using Spanish-made ingredients, after all), and Murad’s story ends in being lost in the imaginative part of his mind, also a liminal space. There is a fluidity of both time and memory in both of these spaces: Faten is bringing forth her culture and roots into the present moment and sharing it with another woman of a different class in a different country, whereas Murad is able to ignore the tourists in his shop and their focus on commodity and material culture in the present moment as he creates from scratch another narrative of his choosing.  They both create a form of power and creative force, ultimately. Both characters are “weaving a carpet of their own making” from their own sense of selfhood. Both refuse to submit as an object to be studied.  In the eyes of society, neither character had chosen the “acceptable” path. They are the two characters in the narrative who we can observe their life moving on in relative hope after the book ends. Hope, not in terms of potential happiness, but in terms of power and a better future for all through their agency.
Which character is in a better position? Neither character appears outwardly to have the upper hand. Faten made it across to Spain, but Murad has a stable position in Morocco and the safety of respectable employment in order to create. Both characters will struggle with class, gender, race, and religious issues in the end, but it is Faten who is given the chance to change things. She possesses physical mobility that he does not possess, and, like Murad, she not only “spins yarns”, but she can cook and create sustenance and nurturance. Like Tariq ibn-Zihad, Arab governor of Tangier, in 711, she made the crossing using her skills, roots, and character traits in order to conquer her clients, make money in a strange land called Spain, and to form a brand-new future. Murad, on the other hand, will form a new future through the mind and his voice, potentially spreading this voice across borders. Faten may have been the conquering force, but Murad is the personification of this hopeful future simply by standing still.

Through Lalami’s book, we learn as readers that hope is inevitably a dangerous pursuit. You could fall into the dark waters and never come back.