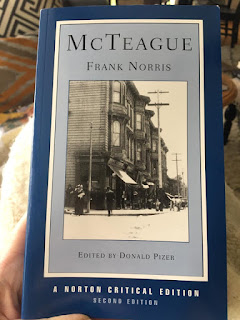 One of David's Bowie's favorite novels, this book is at once surrealistic and funny and also tragic, a combination that is hard to find.  Through out the whole of the novel McTeague, we are faced with attempting to decipher what it means to possess and ultimately what it means to spend. There is a tension in this novel that never seems to find release. Trina does not wish to spend, and her spending is not just a symbolism of satisfying needs and desires. It stems from a physical possession, a physical revelry. Compare this to the discussion on love (pg. 52 Norton): “No, Trina did not know. “Do I love him? Do I love him?” A thousand times she put the question to herself during the next two to three days.  At night she hardly slept, but lay broadly awake for hours in her little, gaily painted bad, with its white netting torturing herself with doubts and questions.” Could love in this novel be a part of possessing?

After their marriage, Trina spends the majority of her time finding solace in the fact that McTeague was truly hers and would always be hers, no matter what. She is seen as wrapping her arms around him constantly as if he is an object possessed. He doesn’t care so much as long as she remains a part of her day and consistently inserted into his life. So, it appears that to Trina, McTeague is something owned, something of value, whereas to McTeague, Trina is something to be gazed upon and kept within the unchangeable painting of his life. Any disruption or surprises would most certainly affect his impressions therefore changing the painting he created from the start. What McTeague does not understand is that he cannot expect Trina to not change, just as she cannot expect McTeague to always be “hers”.

Compare this idea to how Trina sees money. She has $5000 that she won in a lottery. Presumably she will live off of the interest, so this capital needs to stay stable. This is not good enough for Trina. She must possess physically the money even when she knows she will lose money doing so. In essence she doesn’t understand that money is just a representation or symbol. To McTeague, money is something to rely upon. He was used to a finer life through Trina and he did not want to go back. Once the painting was made, he didn’t wish to alter it. McTeague was fine not possessing the money, just as he was fine not physically possessing Trina.  Trina needed to possess both the money and McTeague. Trina is left unsatisfied continually throughout the novel.

All of the contradictions and oppositions that are presented to us in this novel (irreconcilable paradoxes) seem to stem from one problem: Love and what it means to love and how this connects to sexuality/the body. Money is just a substitute for love. In the beginning, we see McTeague winning Trina away from Marcus, while in the background we see Trina doubting behind the scenes. Money becomes to Trina a substitute for the love she actually desires: kindness, compassion, warmth, protection, care, and most of all attention to her as a human being and not a painting. She takes solace in the coins she places in her bed as if they were her lover. And as readers, we understand this feeling. The cold coins are not much different than the coldness of her marital bed, but at least she derives ecstasy from them.

This novel is physical to an extreme: all the violence and the grabbing, biting, injuries, pushing, pulling, squeezing seem to signal something that has been repressed and is bursting out of its confinement. Trina ends up dying because she isn’t allowed to have sexual release (to be “spent”) through the act of love. McTeague ends up in the mine searching for the gold that Trina represented, which in turn represents her as object, not living, breathing, emotional, passionate human. Trina becomes the gold after death, embedded in the rock to be mined, extracted, and brought home again.

In the end in the desert of Death Valley, Trina is transformed into the "half dead canary chittering feebly in its little gilt prison."
Posted by Susan E. Harris-Gamard at 3:26 PM